Karlštejn (Karlstein, Carlstein) is a gothic castle situated about 30km southwest of Prague and one of the most important sites in the Czech Republic. It was founded in 1348 by Charles IV, Holy Roman Emperor-elect and King of Bohemia and is visited by more than 200.000 tourists every year. Apart from its unique architecture and valuable collection of medieval art, this is a beautifully located place in the densely wooded hills of the Berounka river valley.

Cycling from Prague to Karlštejn is a very rewarding experience and not physically challenging at all because the bike path follows the Vltava and Berounka rivers, so there is hardly any climbing required. We usually offer this as a self-guided tour, providing you with a map, itinerary and many useful tips for stops along the way.  From Karlštejn, you can take the train back to Prague (every half hour), if you don’t feel like pedaling the +30k again.

We usually offer this as a self-guided tour, providing you with a map, itinerary and many useful tips for stops along the way.  From Karlštejn, you can take the train back to Prague (every half hour), if you don’t feel like pedaling the +30k again. 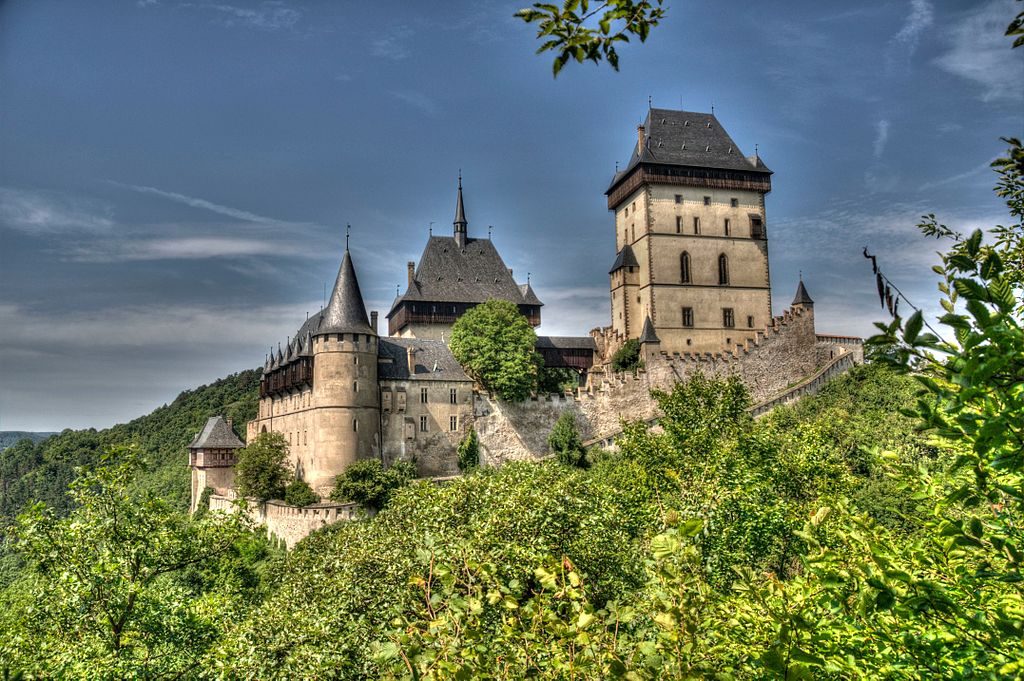 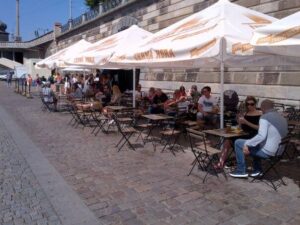 With its many cafés, bars, restaurants, a theatre boat, beach volleyball field, and a popular farmers’ market on Saturdays, this is one of the most popular hang-outs for Praguers. Leaving our service point and crossing the river, the cycle path to Karlstejn first follows the embankment (“náplavka”) before crossing the Vyšehrad tunnel and entering the Podolí neighbourhood. 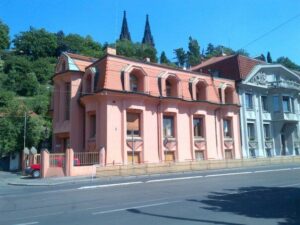 At the railway bridge, you should take a detour from the bike path and have a look at the ensemble of cubist buildings underneath the Vyšehrad fortress. In the Czech Lands, unlike elsewhere in Europe, cubism was not only restricted to painting, but played an importanzt role in architecture in the first decades of the 20th century. The buildings between the Výtoň bridge and the Vyšehrad tunnel are fine examples of this style. You’ll find a museum dedicated to Czech cubism in the Old Town (Dům u černe matky boží), including a beatifully designed cubist café.

Crossing the Vltava river by ferryboat from the “Veslařský ostrov” island (you can use your public transportation ticket or buy one from the boatman) is a fun experience and it will help you avoid the dense bike and roller skate traffic on the left bank. The cycling path on the other side is less popular with Praguers working out and is just as easy to cycle. From here, you are basically only following the river almost until Karlštejn. 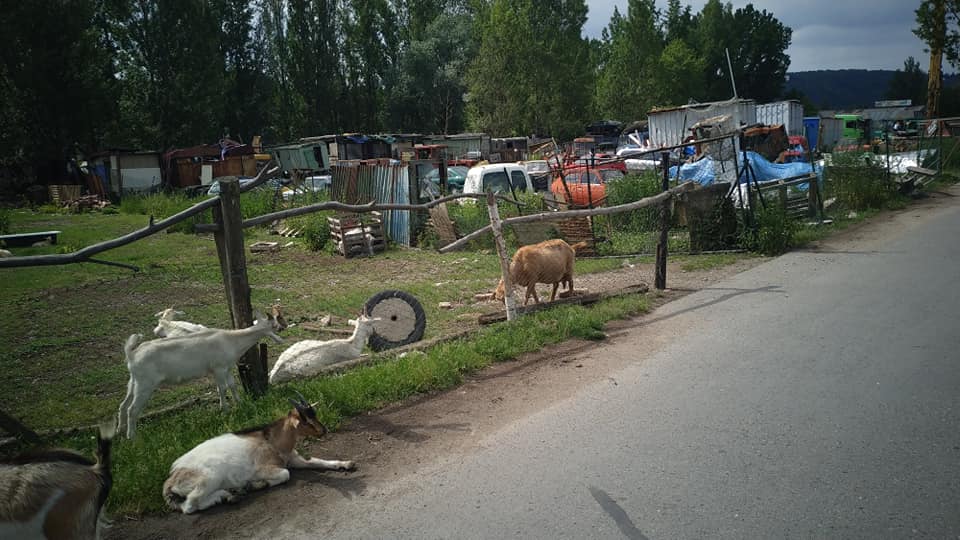 At Lahovičky, the bike path passes one of the weirdest places you’ll find in Prague and around: To the right, there’s a scrap yard with old cars and machinery, whose owners also have a herd of goats and sheep grazing between the rusted trash and along the path. To the left, there is a hot dog and beer stand, one of the many along the route. If you feel like a beer, resist the temptation, there will be more and better pints further down the path.

These are small towns with some lovely architecture (lots of art nouveau private residences from the turn of the 19th/20th century). Rich Praguers used to have their summer and weekend residences here, close to the capital and yet in fresh, clean air by the river. If you have time, visit the castle at Dobřichovice.

Cottage colonies at Radotin and Mokropsy

During communism, having a tiny little cabin in the countryside, built on public owned property and organised in a community fashion, was one of the most popular forms of recreation and made up for the few possibilities of traveling abroad. You’ll find textbook examples of cabin (Czech “chata”) colonies built in the 60s and 70s and beautifully located by the Berounka river. You’ll admire the taste for gardening and design of some of the owners. Word has it most of these huts were originally built with stolen material as there were no hobby markets back then.

There is a number of small breweries along the route, as well as an excellent, award winning cidrerie in Dobřichovice (Cidrerie Kliment). For lagers, try the Radotin brewery (Pivovar Radotin) and the pub in Hostim (passing Karlštejn). For ales and modern beer types, Keil’s beer truck at Lahovičky and the brewery in the old railway station of Řevnice are highly recommended.

If you were to cycle to Karlstejn and back to Prague, the total distance would be almost 70 km. That might sound like a lot, but the route is very flat as you are basically only following the river. However, you can take the train either way. It’s very inexpensive (under EUR 4 per person including bike) and there are frequent connections (usually every half hour). 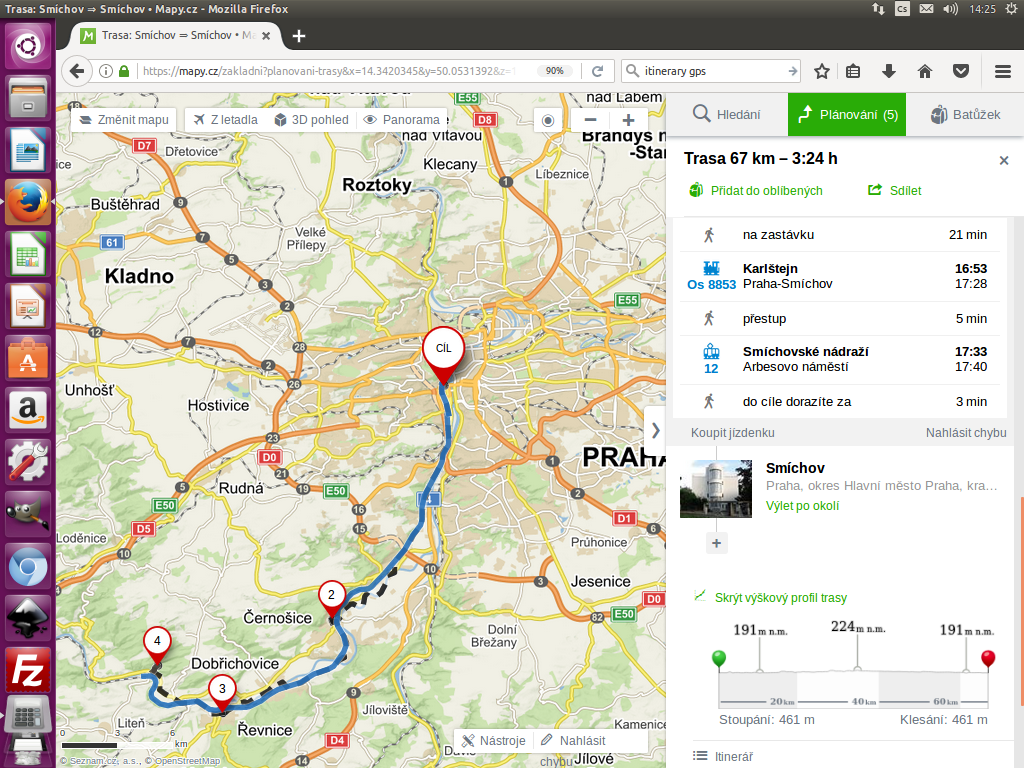 You don’t need any special bike or equipment to enjoy this tour. The terrain is very flat, no climbing worth mentioning, so you could use a single speed bicycle and still won’t work too hard.

We recommend, however, you take a touring bike or a commuter bike with front suspension and comfortable seat because you’ll spend at least three hours cycling (if you take the train back from Karlštejn).

Pick a suitable bike here and make a reservation. 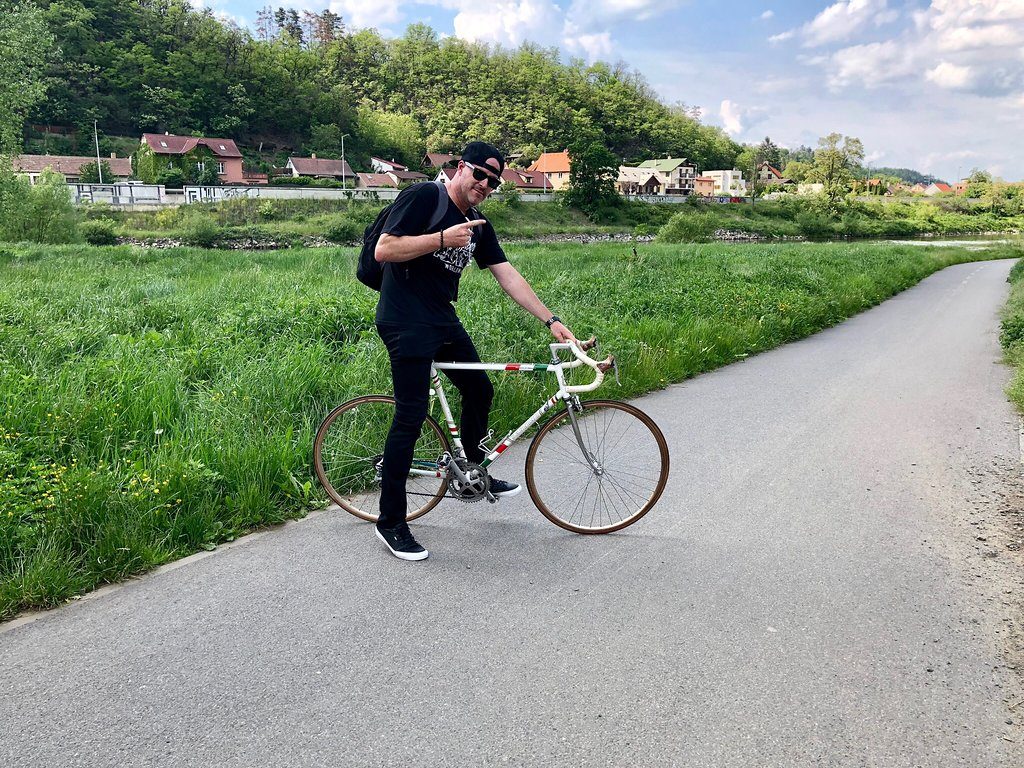